THE DODGE CITY POLL: A TIMELINE

For nearly a year before filling our suit, we assisted Dodge City voters who were trying to work with Debbie Cox in addressing the single-poll issue. Last summer, we received multiple reports of their failed efforts to reach a resolution with Ms. Cox. In September, when she moved the polling site, citing construction that never happened, Dodge City voters asked for our help.
This timeline lists the letters, calls, and other attempts over the past year to resolve the polling issue in Dodge City with Ms. Cox. By late October it became clear she was not interested in opening additional polling sites.
So we sued.
October 5, 2017: Ford County resident Johnny Dunlap meet with Debbie Cox to discuss the need for additional polling locations and a polling site in the Hispanic part of town.
February 14, 2018: During ACLU of Kansas' Dodge City Volunteer Orientation and individual meetings with community members, locals report issues of one polling place and racial disparities in voting districts.
May 25, 2018: Ford County resident Johnny Dunlap and Jose Martinez of the League of United Latin American Citizens) meet with Debbie Cox to discuss the need for additional polling locations.
June 25, 2018: At ACLU of Kansas' Know Your Voting Rights Training in Dodge City, residents continue to express concern about the single polling location and Ms. Cox's unwillingness to open additional sites.
July 27, 2018: During the Dodge City Election Protection Training and in meetings with community members, ACLU of Kansas receives more concerned reports about polling situation.
August 7, 2018: At Ford County Election Protection Community Event, ACLU of Kansas learns more details.
September 14, 2018: Dodge City resident Alejandro Rangel-Lopez informs ACLU that Ms. Cox changed the location of polling site from the Civic Center to the Expo Center, a location over a mile from any bus stop, without a sidewalk along the route, and, on average, twice as far as the Civic Center from the city’s largest employers. Ms. Cox cited construction and voter safety as the reasons for moving the polling site. Local community members request the ACLU of Kansas' increased assistance in addressing the polling site issue with Ms. Cox.
September 24, 2018: ACLU of Kansas calls Ms. Cox, asking for a meeting as soon as possible. She says Friday, October 5 is her only available time. We schedule the phone meeting.
October 3, 2018: ACLU of Kansas sends Debbie Cox a letter of the election administration concerns we wished to address on our October 5 call. Ms. Cox does not respond to the letter but does begin to reach out to some media outlets to publicize the change in polling location and to offer free busing for voters to the new polling location upon request.

October 5, 2018: Debbie Cox’s secretary says she was called away to another meeting and that she would not be free for the rest of the day. ACLU of KS emails Ms. Cox asking to speak to her and reschedule as soon as possible in light of the quickly approaching upcoming election.
October 9, 2018: ACLU of Kansas makes follow-up call to Ms. Cox asking to reschedule the missed meeting. Ms. Cox states she would look at her schedule and call back for the meeting. ACLU of Kansas reiterates that we are continuing to receive complaints about the polling location in Dodge City and that it is very important that we speak with her. Ms. Cox does not call back to reschedule the meeting nor address our concerns.
October 16, 2018: Following no response, ACLU of Kansas sends Ms. Cox a second letter reiterating our concerns about the upcoming election and necessary changes that should be made.
October 18, 2018: Ms. Cox issues cards to hundreds of new voters with the wrong polling information, including the address of the old site rather than the new one. A Dodge City voter sends a photo of one of the cards to the ACLU of Kansas.
October 19, 2018: ACLU of Kansas sends another letter to Ms. Cox informing her of our voter assistance hotline ]suggesting that she help publicize it as a resource to Dodge City voters. Ms. Cox does not respond, but forwards the letter to Brian Caskey, the state Election Director, in an email saying, “LOL.” 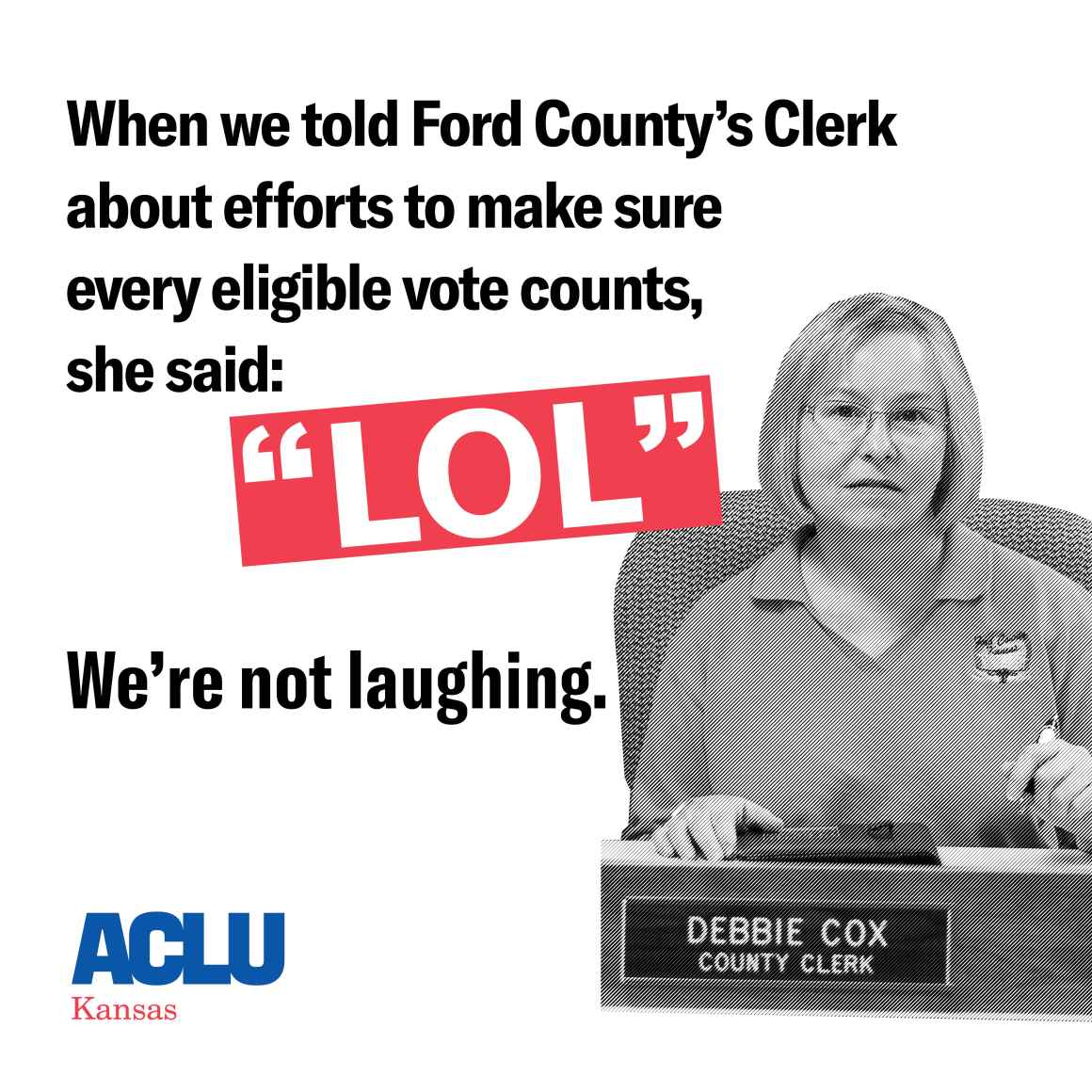 October 26, 2018: ACLU of Kansas files a lawsuit on behalf of LULAC and Alejandro Rangel-Lopez, asking the court to order Debbie Cox to open a second polling location at the Civic Center considering that Ms. Cox refused to engage with us and the election was now around the corner.

November 1, 2018: District Court federal district court denies our motion for a temporary restraining order, citing further voter confusion of another poll but also noting it was troubled by Cox’s “LOL” reaction to the ACLU’s October 19 letter and “whether it manifests a disregard for the 'fundamental significance' that our Constitution places on the right to vote."
November 4, 2018: Midterm elections held. Voter turnout in Dodge City increases at a significantly lower rate than the rest of the state.
November 16, 2018: Ford County files motion to dismiss, calling it “moot” now that the election is over, failing to acknowledge the broader and more troubling issues and also seeking to escape accountability for opening another polling location in Dodge City.
December 7, 2018: ACLU of Kansas files its opposition to the defense motion to dismiss, noting that Cox has still failed to commit to opening another polling location in Dodge City. 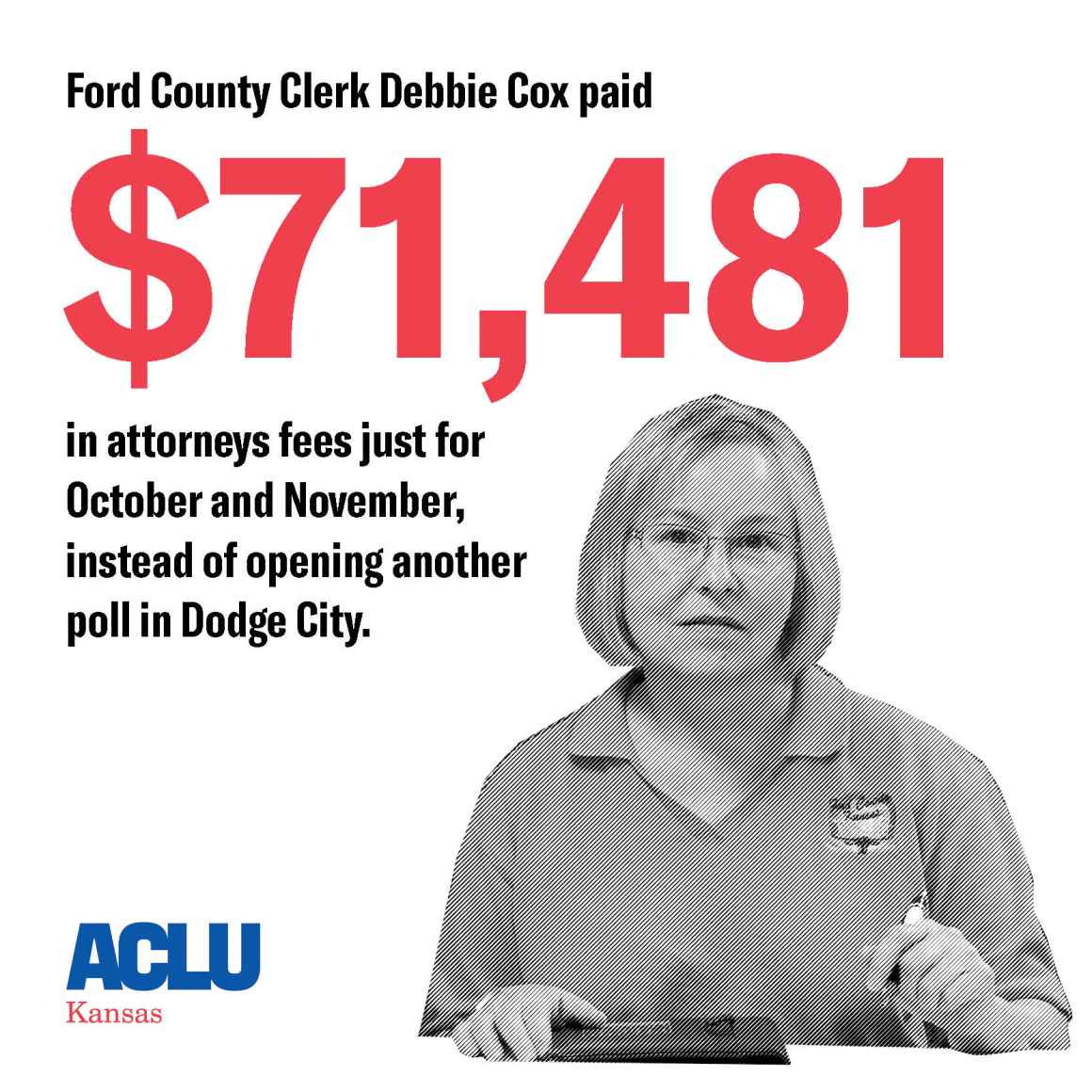 All Democracy is Local: The Impact of County Election Officials on...