In May 2019, the Racial Justice Network prioritized understanding racial profiling in the state and examining whether law enforcement agencies are meeting their legal obligations under state law, KSA 22-4610, to combat profiling. This law requires all law enforcement agencies to adopt a detailed and written policy to preempt racial or other biased-based policing. The policy must have clear definitions of what acts constitute biased policing.
Many of our state’s law enforcement agencies have not complied with these simple requirements.
The Kansas statute provides a means to ensure transparency and necessary action to understand and prevent racial or other biased-based policing.  In recent years, public attention has increasingly focused on policing as a driving force behind the relationships between law enforcement and the communities they work in. Tonganoxie, Kansas earned national attention when Karle Robinson was handcuffed by police while moving into his own home, then obstructed from filing a racial profiling complaint by the department and subjected to a campaign of surveillance and harassment. The ACLU of Kansas has called on the Attorney General to investigate.
We reviewed reports from 2018 from over 400 Kansas law enforcement agencies and found that many have failed to comply with their obligations to implement plans for training of officers, establish an explicit policy against racial and other biased-based policing, or collect traffic stop data.
NO TRAINING
Of the 398 agencies that did submit a report for 2018, 20 of the agencies did not have all non-exempt officers complete training as required in the Kansas state. 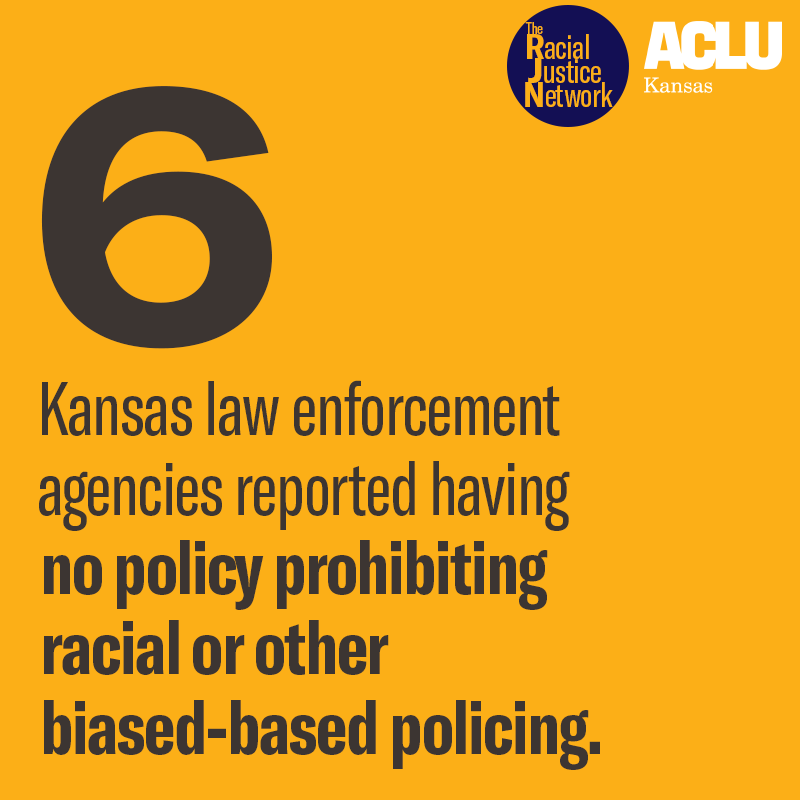 NO POLICY AGAINST BIASED-BASED POLICING
Of the 398 agencies that did submit a report for 2018, 6 have no explicit policy prohibiting racial or other bias-based policing.
But even many agencies who do have an explicit policy prohibiting racial or other biased-based policing do not mandate specific discipline for sustained complaints - 43 of the agencies who do have a policy do not have specific discipline for sustained complaints.
NO PLAN 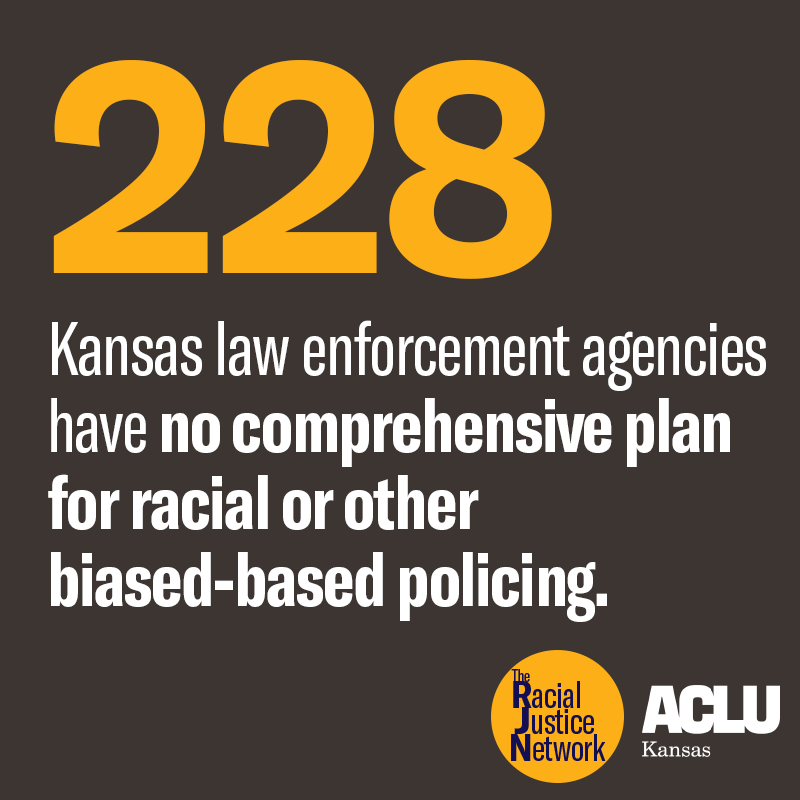 Of the 398 agencies that submitted a report for 2018, a whopping 228 agencies have no racial or other biased-based policing comprehensive plan.
A TREND OF INDIFFERENCE & LACK OF TRANSPARENCY
The state’s system of tracking and investigating racial profiling complaints has continued a trend of vagueness and secrecy observed in 2017 by The Kansas City Star.
31 Kansas law enforcement agencies failed to submit an annual report for 2018, raising major concerns about not only what their plans and policies around racial profiling are, but also about whether legitimate complaints specific to these units have failed to be recorded, reported, and investigated. The Lawrence Police Department did respond to Campaign Zero with some insight into policies of its own policing and data collection methods, but this level of transparency is an anomaly in the state. 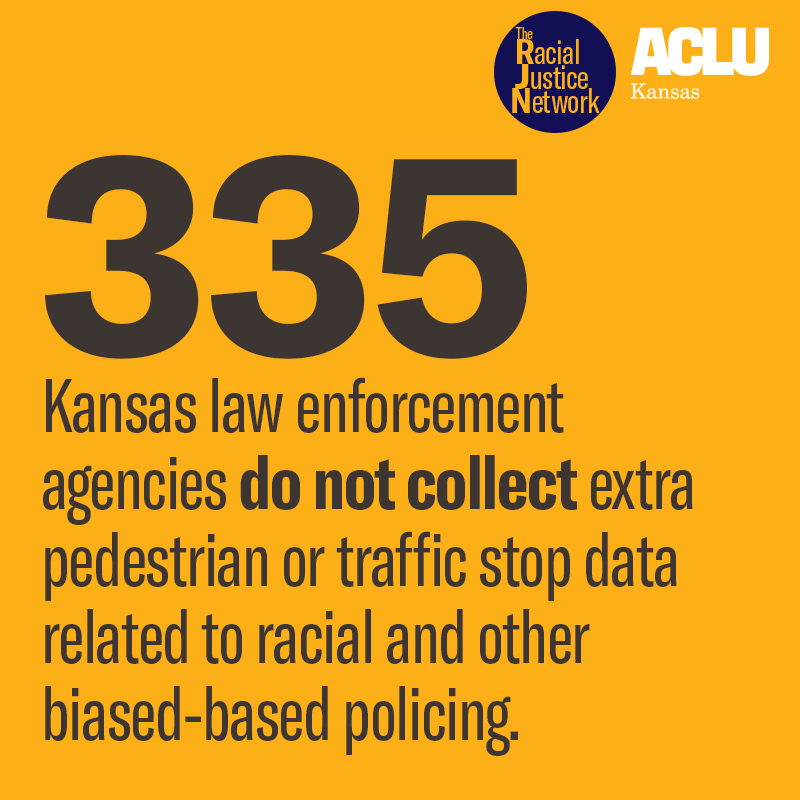 Just as concerning, though, is that of the 398 agencies that did submit a 2018 report, 335 do not collect extra pedestrian or traffic stop data related to racial and other biased-based policing. The significant efforts to collect racial profiling data in Kansas have been limited to the Wichita police department. 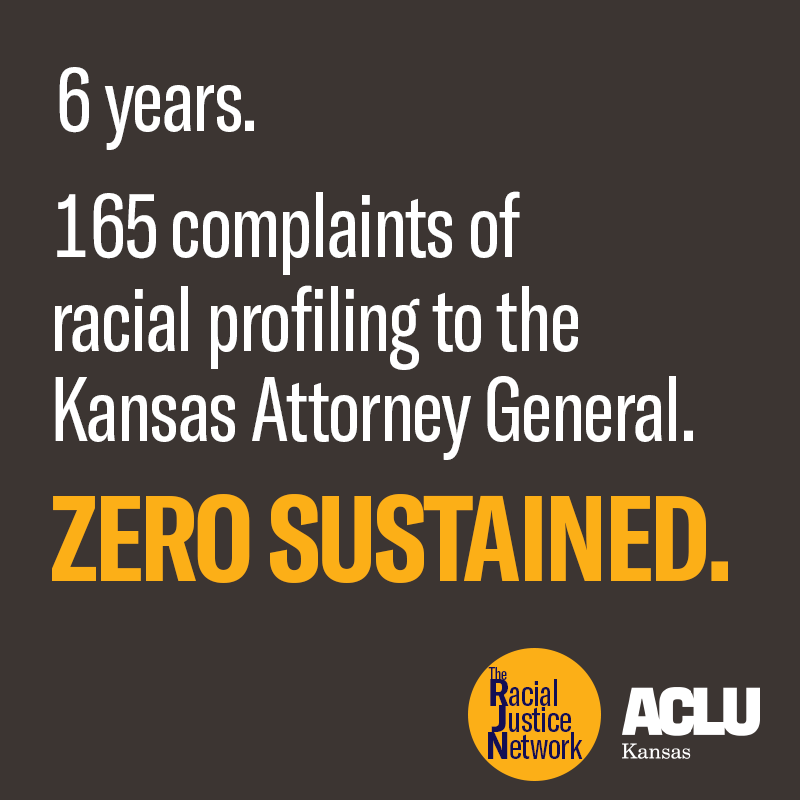 The Kansas Attorney General’s office has the duty of investigating reports of racial profiling complaints. But as we learned in recently in Tonganoxie, many individuals may never have the opportunity to even file a report. Reports that do manage to get filed with the AG’s office are rarely sustained - from 2012 to 2018, zero of the 165 complaints filed were sustained.

Know Your Rights When Stopped by Police in Kansas