Mayor Kelly and Members of the City Council, thank you for bringing this ordinance forward and allowing for public comment. I represent the ACLU of Kansas, a non-partisan, membership-based civil rights and civil liberties advocacy organization, with over 40,000 supporters in the state of Kansas. We support this Immigration and Customs Enforcement non-compliance ordinance, and applaud the efforts of Roeland Park to make its city safe and welcoming for all residents.

Just recently in Kansas City, an ICE agent without a judicial warrant broke a window and pried a man out of his car. American citizens are often held by ICE for months or years because their race and accent make them suspect. Asylum-seekers trying to find a path to legal status are prevented from having their day in court, and are separated from their children. Victims of violence refuse to seek out law enforcement for fear of being reported to ICE agents. No one feels safe.

An ordinance that allows law enforcement not to comply with Immigration and Customs Enforcement would improve relationships between police and the community, would allow Roeland Park residents to go about their lives without fear and intimidation, and would allow victims of crimes to confidently approach police without fear of being detained themselves.

Principal Reasons to Decline Involvement in Federal Immigration Enforcement
➢ Local Law Enforcement/Community Relations – Local law enforcement has traditional local priorities that include responding to emergencies, patrolling neighborhoods to prevent crime, etc. Time spent engaging in federal immigration enforcement detracts from the performance of these core functions. Immigration enforcement does not advance local priorities because it usually targets individuals who pose no threat to public safety.1 When local law enforcement officers lose the trust of the community, survivors of domestic violence refrain from reporting offenses, and individuals with key information about burglaries fail to contact the police, to name just two examples. These outcomes are not limited to the undocumented population. Many citizens and immigrants with legal status often fall victim to mistakes by ICE, therefore their views toward local officials can sour as well. When that happens, law enforcement’s relationship with the entire community suffers.

➢ Fiscal Considerations – Immigration enforcement is expensive.2  The federal government does not generally reimburse the cost of local programs and practices, and local jurisdictions can incur a substantial amount of added expense. These costs come through additional detention expenses, overtime payments for personnel, and litigation costs.3 For example, a county in Oregon was found liable for violating the Fourth Amendment for detaining an individual pursuant to an ICE detainer request. As a result of the lawsuit, the county was ordered to pay over $40,000.4

➢ Legal Exposure – An ICE detainer is a voluntary request and does not impose any legal obligation on the receiving jurisdiction. Local police acting upon ICE detainer requests have faced liability for unlawful detentions in violation of the Fourth Amendment and the Fourteenth Amendment’s Due Process Clause. Complying with ICE Detainers and participating in the 287(g) program are not required by any federal laws and in fact, has caused constitutional violations.

➢ Safer Communities – ICE’s own data says that violent crimes are not the primary reason for deportation. While there are 27 different types of charges under the SCP, 17 of them are for nonviolent offenses. In spite of assertions by CBP (Customs and Border Protection), and ICE (Immigration and Customs Enforcement) that they target violent criminals with their so-called “Secure Communities Program,” we have observed unconstitutional tactics to remove asylum-seekers, non-violent undocumented immigrants, and victims of crimes. 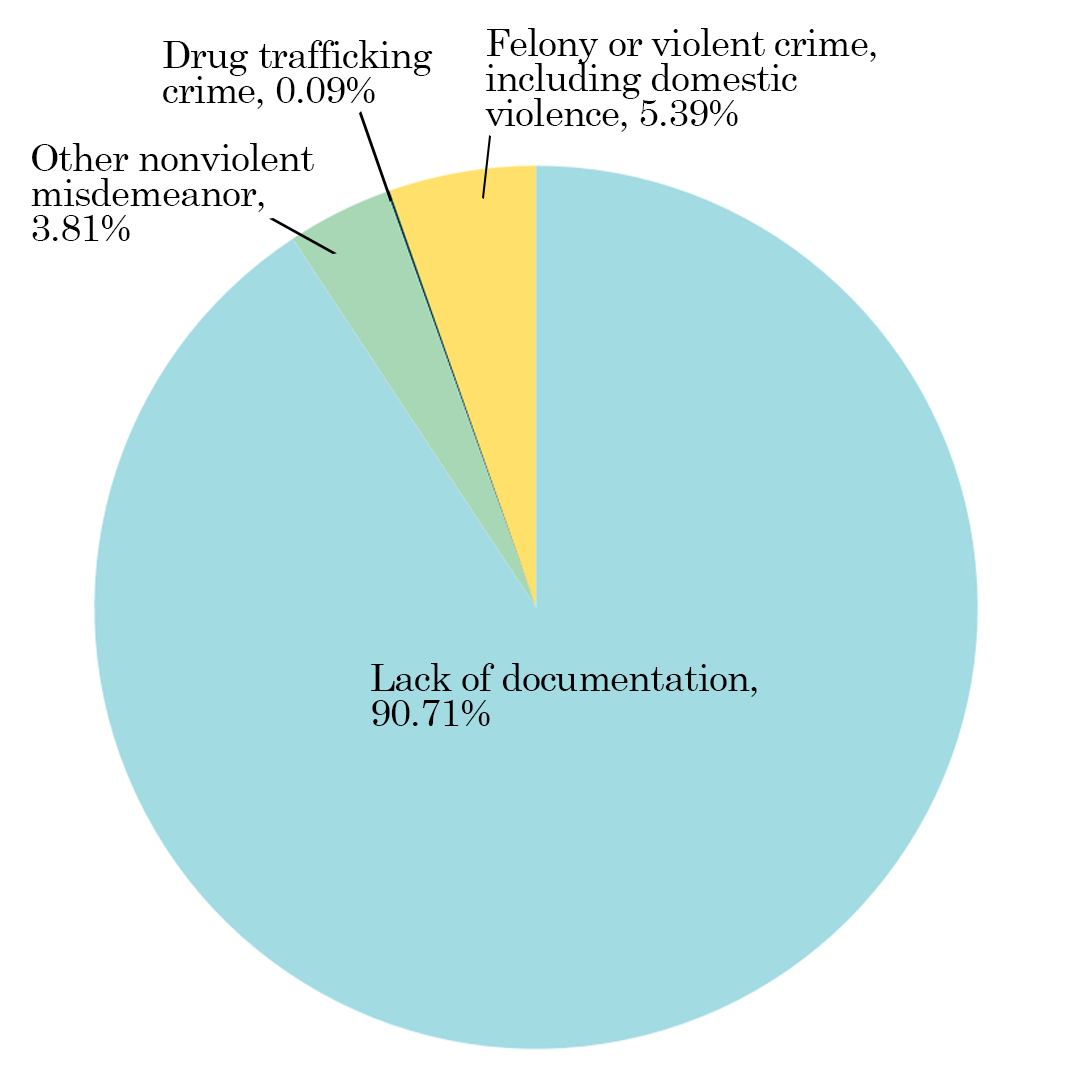 It has been documented by various studies, but the data consistently shows the same thing; immigrant communities have lower violent crime rates.8 Also, those who are undocumented commit violent crime at a lower rate.9 An ICE non-compliance ordinance still allows for violent crimes to be prosecuted, and for felony warrants to be honored. It also allows peaceful residents to go about their lives without fear, and to report crime if it happens.

Passing this ordinance not only affirms your commitment for diversity and to be a place that is safe and welcoming, but it is simply the smart thing to do.

1 The ACLU used TRAC data from Syracuse University to survey 35 counties in Kansas. Of the 6,697 SCP charges used to deport people from those 35 counties in 2011-2019, 6,330 were for non-violent offenses. That means that only 5% of charges were for violent offenses, while 95% of the reasons given to deport people from Kansas were non-violent offenses, 90% of which simply cited inability to prove legal status.
2 Edward F. Ramos, Fiscal Impact Analysis of Miami-Dade’s Policy on “Immigration Detainers (2014) (“[T]he annual fiscal impact of honoring immigration detainers in Miami-Dade County is estimated to be approximately $12.5 million.”), https://immigrantjustice.org/sites/immigrantjustice.org/files/Miami%20Da...
3 A study by Justice Strategies of Los Angeles’ compliance with ICE detainers indicated that the program cost the county over $26 million per year: https://www.justicestrategies.org/publications/2012/cost-responding-immi...
4 https://www.oregonlive.com/crime/2019/06/douglas-county-sheriff-violated...
5 https://www.latimes.com/california/story/2019-09-27/federal-judge-issues...
6 Moreno v. Napolitano, Case No. 1:11-cv-05452, *16-17, 2016 U.S. Dist. LEXIS 136449 (N.D. Ill., Sept. 30, 2016).
7 Gerstein v. Pugh, 420 U.S. 103, 114 (1975).
8 http://immigrationpolicy.org/research/criminalization-immigration-united...
9 https://www.themarshallproject.org/2019/05/13/is-there-a-connection-betw...