Chairman Jennings and Members of this Committee,

Thank you for the opportunity to present testimony today. My name is Nadine Johnson. I am the Executive Director of the ACLU of Kansas. We are a nonpartisan, non-profit organization that works to preserve and strengthen the constitutional liberties of every person in Kansas. The ACLU of Kansas supports HB 2686 as an important step in Kansas’s criminal justice reform efforts, one that will alleviate some burden on the corrections system while affording affected Kansans the ability to  re-enter and contribute to their communities.

This measure is narrow and focused. It would affect very few Kansans currently incarcerated—just ten or less—and the total number of individuals whose sentence would be affected is less than 200. The retroactivity provision does not create a large-scale prisoner release. It is a modest, but important, measure that would do its part to reduce prison overcrowding, probation caseloads, and related spending. Reducing the prison population in our state safely and addressing the needs of probation offices with a high volume of caseloads will require myriad solutions; HB 2686 provides one.

By the numbers, Kansans want a less punitive approach to drug possession. A 2016 Fort Hays University Docking Institute survey on criminal justice reform in Kansas showed that over three-quarters (76%) of respondents believed reclassifying certain nonviolent drug possession crimes to misdemeanors would “help communities by saving taxpayer dollars that could be used for other purposes.” Passing HB 2686 is a recognition of the need for reform and the changing landscape of marijuana laws across the country, including with our neighbors in Colorado, Oklahoma, and Missouri, where an automatic expungement effort is underway in Kansas City. Perhaps most importantly, it is a means of providing critical relief to persons whose felony conviction for personal use of marijuana has created significant collateral consequences. We know that individuals with felony records have difficulty finding employment, obtaining housing, and securing the services necessary for successful re-entry into the community. By removing the possibility of a felony conviction for marijuana possession, HB 2686 will benefit Kansans now and in the future by removing unnecessary barriers to their success.

The ACLU of Kansas supports HB 2686 and urges this Committee to pass it favorably. Thank you for time and consideration of this important issue. I am happy to stand for questions. 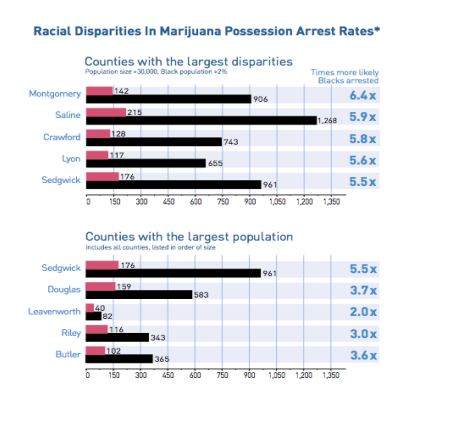 Source: The War on Marijuana in Black and White, available at https://www.aclu.org/report/report-war-marijuana-black-and-white

Data obtained from the FBI / Uniform Crime Reporting Program Data and U.S. Census Data. *All arrest rates are per 100,000 and based on 2010 data.

1 See Table 6, p. 49, The War on Marijuana in Black and White, available at https://www.aclu.org/report/report-war-marijuana-black-andwhite?redirect...
2 Id.